The steppe spilled away into the distance, marsh-green and silvered with pooled rain. The morning air was cold and misted, and our breath turned to fog when we spoke. As clouds sealed the plain with grey light, the land seemed eerily still until a hare sprang to its feet. From its concealing flat crouch against the ground, the animal suddenly loomed large on the unbroken plain, its ears spoked like a tuning fork above its head. Seen against the strictly horizontal, anything vertical in a level landscape is lent greater prominence than usual, magnified by the lack of competing features and the desire of the human eye to connect with something solid in all that space. There is less to dilute its presence in the emptiness, its seemingly lone tenancy is magnetic. The hare snapped out of stillness again, sprinting across the wet plain, flinging a necklace of bright water into the air with each step. When it jerked to a sudden stop, a second hare appeared where the first one had been, kicking up water into the distance, parting a path of scattered light through the grasses. I followed its run as it splashed west, shrinking into the distance until I saw a set of ghostly figures in the mist, a family of cranes against the horizon. 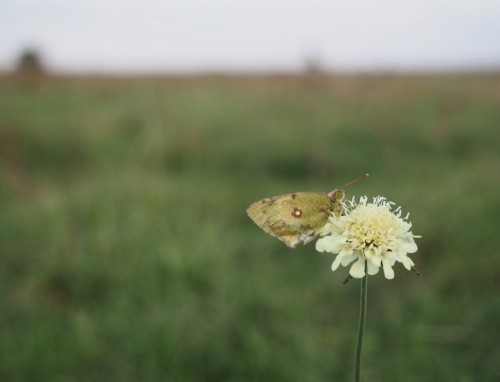 The Hortobágy National Park is the second largest unbroken steppe west of the Ural Mountains and home to such rare creatures as the imperial eagle, saker and steppe polecat, as well as the improbable pageantry of the great bustard, a bird species whose males weigh up to 21 kilos, making them the world’s heaviest flying animal. But, like the remnant prairies of the American plains, these vast Hungarian grasslands are as significant for their cultural history as for the rich wildlife they sustain. Called the puszta by Hungarians, the steppe was once a world of semi-nomadic horsemen and pastoralist herders steering their animals beneath big skies across the sweeping sway of the grasslands, and it remains to this day an important site for the continued husbanding of the nation’s emblematic and ancient breeds of livestock such as the corkscrew-horned Racka sheep and the long-horned Hungarian grey cattle. Utilising the far-reaching visibility of an open landscape for communication, shepherds developed a unique grassland language, operating the evocative and isolated water wells that are dotted about the plain as a messaging system. As told by Dirk Hilbers in the excellent Crossbill Guide to The Hortobágy, the shepherds would position the bucket and the wooden dipping pole, called the sweep, in specific configurations to convey to others on the plain anything from news of a death or the arrival of the police to the time for driving animals to a watering place or that a meal was ready. It was a language made possible by geography, the braided tongue of people and place. 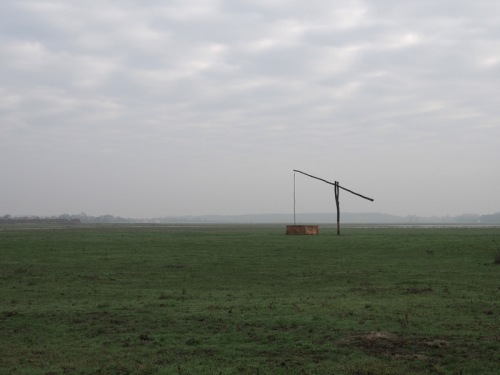 The space between earth and sky is where much of the larger life of the steppe takes sudden shape. Despite its seemingly obliging openness, the level land in autumn can be unexpectedly deceptive, sealing its creaturely secrets inside shifting mists and bouts of muddy, deflecting light. Squalls of northern winds and lancing rain often keep birds pinned to the deep grasses in wait for more beneficent days. Even the faintest of furrows can be as concealing as a canyon until an approaching eagle raises geese into the air like wreaths of smoke from a wildfire. But in whatever temper of weather or unforgiving light you find the place, the elegant cranes of the plain are its unmistakeable graces. They claim the puszta with regal authority, the adults reaching well over a metre in height and wearing a scarlet crown on each of their smooth, rounded heads. Magnificence is their kingdom: the long, sinuous neck and plume of lavish feathers about the tail, the stately and stilted legs. Even when just standing they soar.

Each October up to 135,000 common cranes gather around the Hortobágy during migration, assembling from points as far north as Scandinavia and the northwest of Russia. They spend their autumn days in flocks and family groups dispersed across the vast plain, feeding on left-over agricultural spoils such as maize and potatoes until hard frosts in November spark their journey further south. Throughout the day we encounter these small parishes of cranes, roaming the dark earth as slowly as shadows lengthening steadily throughout the afternoon. Their movements could be meditations as they glean the fields, precise, measured and spare. But for all the beauty of seeing them in the fullness of light, it’s the enclosing end of day that we await.

As the sun begins to slide towards the horizon, the evening reverie begins. In all directions, cranes unfurl and fan their wings, lifting themselves from countless fields across the plain until the sky fills with long ribbons of magnificent creatures. Seeking refuge from nocturnal predators, they cross the steppe to reach a series of fish ponds to roost in shallow water, following the same aerial paths each night during their stay. As though watching the sea roll in along a shore, wave after wave of them pass overhead, a seemingly endless swell of movement against the dimming sky, carried along by the deep breathings of their wings. As the glow of the slipping sun hits the cold autumn plain, tens of thousands of cranes bugle in beautiful unison as their young whistle beside them in flight. There is no space for silence between waves, no room for thought or wishes or worries amidst such abundance, just the trembling beauty of their passing: all the gathered light and geometry of dark lines etching the horizon, the burnished sky and its evening riders. Even in darkness, long after the last sliver of sun has dropped away, you can still hear those trumpeting calls of longing that keep their family groups intact. The cranes push on above the plain into night, a river of song as bright as stars across the sky.

28 thoughts on “The Bugling Sky”