“If there is magic on this planet, it is contained within water.” ~ Loren Eiseley, ‘The Flow of the River’

Strong and muscular, Otny Thomas stood like a figurehead at the prow of the boat. He had an angel tattooed on his back, and a large centipede inked in a coiled and wavy line around his navel. He’d eagerly borrowed my binoculars, having never before experienced the rapturous magnification of glass, and was already pointing out to me brahminy kites and great-billed herons in the far distance. In his mid-thirties, and originally from the small neighbouring islet of Pagga, Otny now lived on Bangka Island. Welcoming, friendly and fun – a man of the beach as much as the island or sea – he was unshakeably focused when dealing with his technical tasks on the boat, or in preparation for leading a dive. Passing me the binoculars, he began suiting up, sweeping back his black thatch of hair with a hand, two small patches lightened by henna to a copper glow, a silver cross swinging from a long chain around his neck. 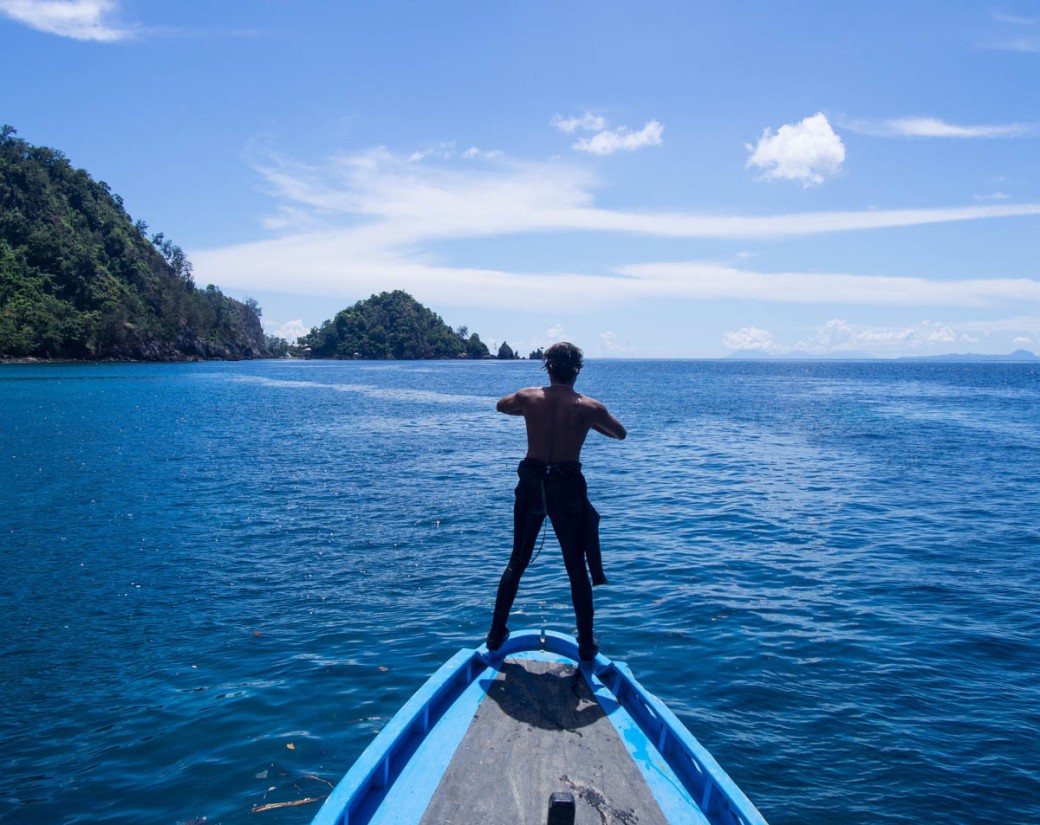 Once ready, he went through the dive with those around him, running through various signals for the marine species they might encounter. He folded his hands together in a variety of ways to silently name seahorse, frogfish, crab, angelfish, shark and nudibranch. Everyone who dived with him remarked on his extraordinary ability to locate the smallest of things in the underwater environment. Hand signals and safety checks completed, Otny gave the sign for ‘OK’ and tipped backwards off the edge of the boat, each of the other divers following him into the water. I let them clear the area and then plunged in.

Sea-sway, sun-drift, water-light. Schools of silver fish spilling like shimmering silt through a river. Wave shadows mirrored and rippling across an undulating bed of soft corals, the tug of the sea fanning a million tiny polyps like meadow grasses in a summer breeze. Bodies banded like wasps, Moorish idols glided and glimmered, each one trailing a snaking white streamer from its dorsal fin. A blue tang, lapis and lemon yellow, gleamed beneath me. Dazzling and luminous hues rose to either side, built up into dense, overlapping neighbourhoods of breathing beings, creating a fantastical underwater city, where both architecture and residents are alive. I floated over whole seascapes of bewildering coral shapes: magenta rosettes, delicately abraded with crystalline stems; a suite of circular discs like an array of radio telescope dishes scanning deep space, each one delineated by radial slices resembling the rays of the sun; a fuchsia pillow pitted with the crater holes of an elaborate sponge, multi-chambered and tenanted by small fish striped blood orange and cream; an encrustation of amethyst plates, stippled with countless pale pillars. The coral reef rippled and dipped with long valleys and hidden glades, their sweeping vistas broken by steep, crenellated bluffs, where domino damselfish, black and white and striking, danced on the lip of the crevasse without any fear of falling. I swam through a shallow gorge that opened onto a vista of stag coral, as if all the deer antlers mounted on the walls of country estates had been piled together at the bottom of the sea. From deep wells of water fluttered flights of butterfly fish, large and buoyant but as laterally thin as their namesake’s wings, lavishly done up in summer tints: lemon, tangerine and apricot. The arms of large sea stars, cornflower blue and luxuriously splayed across coral beds, quivered in the current. 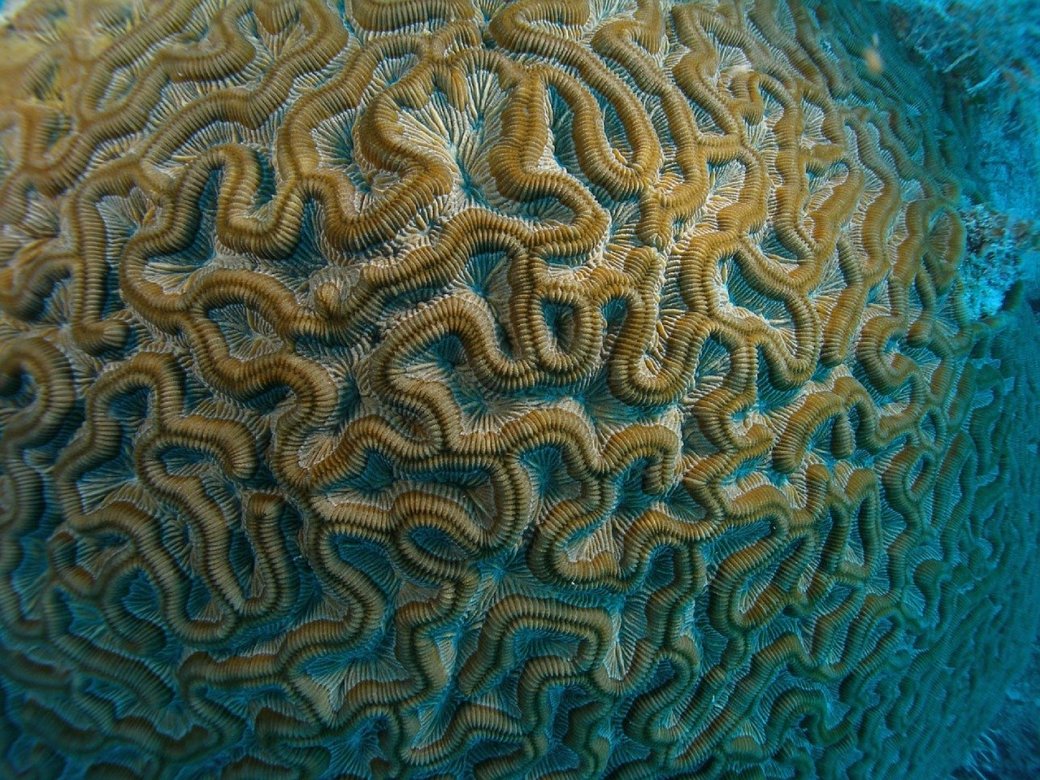 An intense sense of compression was attached to this trancelike world, its immersion in water magnifying it to such a luminous and limpid degree that each of its components were revealed as complex miniature worlds, intricately beautiful in both design and behaviour. A metre or two of reef summoned a whole continent of terrestrial features to mind. The bleached and stony pieces of coral that the girls on the breakwater had played with bore little resemblance to their living kin, having washed up as just the hard grey skeletons of their former selves. Underwater, in a vale of light, the coral reef rose and stretched like a kingdom of unimpeachable pageantry, invested with mobility, colour and lucency. It was like dropping into a psychedelic dream, some mind-altering fantasy of forms so stupefying as to feel suspended not solely in water but within the current of a baroque imagination.

A coral reef is home to a considerable number of constituents, and yet this enormous span of submerged beauty would have begun with individual, free-floating, hard coral polyps, tiny animals that are related to jelly fish and sea anemones. Finding a suitable rocky surface to attach themselves to at the edge of the island, these coral polyps initiated the process of reef construction, each one secreting a calcium carbonate sheath which acts as the animal’s protective dwelling. As it grows, the polyp slowly lifts, sealing off the lower floor of its house and building a new one on top of it, a process continually repeated until a high-rise of closed chambers form the stony base material of the reef. Rarely is this structural work done in isolation, however, as most coral is colonial, a living and thriving community of animals coalescing into a coral head. Each compound organism can be composed of hundreds or even thousands of identical polyps from the same species, either the clonal buds of parent polyps or sexually produced through a cloudburst of spawn. These creatures largely seek shallow seas, where the light of the sun pours unimpeded through water, their individual housings cemented together for greater stability. There, in symbiosis with a type of algae, called zooxanthellae, that lives within their cells, the hard corals, found on the reef in a multitude of co-habiting species alongside soft corals, sponges, anemones and sea fans, are able to exist in such nutrient-poor seas. The algae acts as the coral’s agent for photosynthesis, contracted out to process sunlight into nourishment. A coral reef, like the assembly of starlings off the coast at Brighton, only exists in aggregate – it functions and thrives through cohesion. This amplitude emits a noticeable crackling, the ever-present underwater sound of a healthy living reef, all its creatures and components, all its multitudinous expressions of existence, continually in the process of becoming.

The interconnectedness of this world within water became abundantly clear to me when I swam back to the boat, anchored over deeper sea. A lone coral cone rose from the sandy depths, a miniature version of all these volcanic islands strung out across the Indonesian archipelago. Fish clouded its colorful interstices, gathered in swirling, tenebrous masses around the vermillion, teal and emerald coral heads, where pearlescent thimbles studded their surfaces. It could have been a streetlamp on a summer night, its beam pulling in all the myriad moths and winged insects of the surrounding landscape, soothing them from the dark to dance in mad profusion about its crown of light. All around me, where the sands stretched away, I could see little more than a handful of fish sliding through the dim spaces, but the tower of living coral shimmered and heaved with them, circling, finning and darting around it as though a god they were honouring with their attentions. A staggering column of connected creatures, it was a murmuration within the wondrous sea.

Later, back on the boat, I asked Otny about the threat posed by the mine to these thriving coral reefs around the island, remembering the stark video footage I’d seen with Ulva and Owen.

“It used to be a beautiful coral reef and great for diving,” he said, referring to the one on which boulders had been dumped by the mining company. “Now it’s destroyed. There’s nothing.”

“I hope the mine stays closed,” I said.

“It will stay closed,” Otny replied, his eyes fastened resolutely ahead of us.

‘A World Within Water’ is an excerpt from my latest book, Irreplaceable: The Fight to Save our Wild Places. The book celebrates those imperilled places and wild species – such as Bangka Island and its surrounding coral reefs in Indonesia, which are theatened by illegal mining – that are increasingly vanishing from our world, as well as telling the stories of the extraordinary resistance to their loss, the vital and inspiring engagement of those people who live and work amidst them. Whether it’s threatened ancient woodlands or urban meadows, tallgrass prairies or coral reefs, their stories are ones of defiance rather than elegy, honouring wonder, connections and community in the face of potentially immense loss, the sustaining ties forged between people, nature and place.

4 thoughts on “A World Within Water”