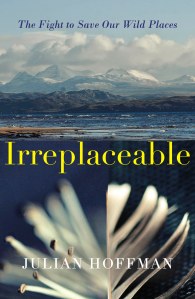 This summer, six years after I began writing it, Irreplaceable finally set out on a path of its own when it was published by Hamish Hamilton and Penguin Books. Celebrating those threatened places and wild species that are increasingly vanishing from our world, the book tells the stories of the extraordinary resistance to their loss, the vital and inspiring engagement of those people who seek to protect what is of value to both wild and human communities. Whether it’s threatened ancient woodlands, urban allotments, coral reefs or relict tallgrass prairies, or whether it be endangered nightingales, redwoods, Balkan lynx or hornbills, their stories are ones of defiance rather than elegy, honouring wonder, connections and community in the face of potentially immense loss, the sustaining ties forged between people, nature and place. As the loss of wildlife, habitats and landscapes is a widespread phenomenon, the book is necessarily global in scope, journeying from Kent to Glasgow to the Balkans and from America to India and Indonesia. But wherever it is set, and in whatever language or accent that was spoken there, I heard the same words as I travelled: Once it’s gone, it’s gone. And we can never get it back. I wrote this book in the hope that we can seize the determination, spirit and resolve to hold on to the irreplaceable.

I’ve been overwhelmed and deeply honoured by the response to the book so far, including in these recent reviews linked to below:

“A passionate and lyrical work of reportage and advocacy.” ~ Caspar Henderson, The Guardian

“A powerful, tender, inspiring clarion call to save the places that matter, right across the globe.” ~Nature’s Home, RSPB

“The power of Hoffman’s book lies in the reporting: he doesn’t deal – as many environmentalists do – in generalities and alarmist warnings about what lies ahead for the world, but in the specifics of the here and now.” ~ Evening Standard Book of the Week

“These tales of Hoffman are about Julian’s mission to give voice to those up against it, to bear witness. In telling their stories, this collection of essays from the front line of environmental campaigning is a powerful form of place writing.” ~ Paul Evans, Caught by the River

“So if you read one book this year, make it Julian Hoffman’s Irreplaceable. I’m not going to dilute that statement with qualifiers (‘If you read one nonfiction book…’ or ‘If you like nature books…’). It’s too important a book to limit its audience in any way.” ~ Rebecca Foster, Shiny New Books

An extract from the book’s introduction can be read here on the wonderful Caught by the River site. And a recent podcast about the book can be found at Beneath the Stream, along with a filmed interview with John Robb at Lush. The book can now be purchased at your favourite independent bookshop or Waterstones, as well as online at Hive, Amazon, Blackwell’s and other sellers throughout the world.

As human lives and their indelible connections to the natural world sit at the heart of the book, there are many people out there to whom I owe a debt of gratitude – first, for their courageous and continuing efforts to protect and raise awareness of threatened places and wild species, and, second, for entrusting their intimate stories of belonging and resistance to me. Without them, this book simply wouldn’t exist. Although the book contains no photographs, I thought I’d use this opportunity to post images of just a few of the people and threatened places and wildlife to be found within its pages.

Upcoming autumn events in the UK on behalf of Irreplaceable, including the Kendal Mountain Literature Festival, can be found here, and will be updated as more are confirmed.

4 thoughts on “Irreplaceable: The Fight to Save Our Wild Places”