Like a river on a map, I trace the sinuous line with my finger as it meanders over the stone. The crystallised vein is rust-orange in a shadowy white expanse. The marble is rougher than I’d imagined, more like a sheet of compressed salt, baked solid by sun. A few succulents flower in the fissures, sustained by grains of soil wind-spilled into the cracks – enough to send up a shower of pale yellow stars. I hear the sighs of the sea beside me, whispers of wind through the pines. I’m standing in an abandoned quarry, hemmed in by its high cathedral walls, seawater licking the cove. A flight of herons steers eastwards across the sky. I follow that weaving line in the marble until the mineral seam slips out of reach, rising up the cliffs like a lit fuse, imagining all those hands that have worked this shore.

It’s hard to reconcile the empty extravagance of the coast with the scenes that preceded it, when hundreds of men laboured here. On the southern tip of the island of Thassos, the marble shore is an ancient workplace, first quarried for its prized deposits in the 6th century BC. For 1,200 years, until the quarries were suddenly deserted in the 6th century AD, marble from this cape travelled the known world. Vast blocks of the valuable stone were loosened by a series of closely-spaced nails and blocks hammered in strict lines, then levered out by a complex system of winches and pulleys, the entire mechanism turned like a mill by men, most probably slaves, running inside enormous wooden wheels, or walking all day in circles around a horizontal turn crank. Freed from the cliffs, the stone tablets were hoisted onto boats lashed to the coast, which set sail for ports throughout Asia, Africa and the Mediterranean. The Thassos marble was then chiselled, shaped and sculpted, transformed from its raw, sea-washed beauty into a suite of artful elegance: statues, columns, arcades, porticoes, walkways and edifices. Wherever it is still found, the marble must carry the light of this island.

There’s a melancholy edge to the day, a warm wind freighted with speckled rain. The storms that lashed the island overnight have been rinsed away, leaving a low grey sky spread across the sea. The marble is mute in this cast of light, solemn and ungiving. But later on, when sunlight returns the last days of summer to us, the marble begins to glow. The stone simmers into a hot glare. The tide pools brim with sudden glitter, reflecting the sun-scorched brilliance to a pure white profundity. I stand on a shore of light, ripples on the sea like fired glass. Absorbing it all, the marble seems to burn. To work this coast must have blinded, as if forever condemned to stare sightless at the sun.

This landscape is an echo, cryptic and obscure. It’s a mysterious resonance of the original, much larger, cape. A submerged marble reef suggests its earlier shape, ringed by an archipelago of lonesome rocks set apart from the island, as if the bed of worked stone sank from the weight it relinquished. I walk southwards, rising and falling between the coves of mined stone. The marble slopes in tilting planes ahead of me, a white world sliding into the sea. I drop down into a bay and find a vast, fluted column, a relic of the ancient works. It’s enthroned in stark beauty, as if the ruin of some obliterating catastrophe. Being in its presence casts a strange mood about the bay. It looks to have toppled straight from a pedestal, as if this was always its intended destination. Abandoned on a midden of broken stone, where sea-round pebbles have been mounded into cairns, the column summons the memory of those enslaved to this shore, who gave their lives to the sun, to this ancient marble light. 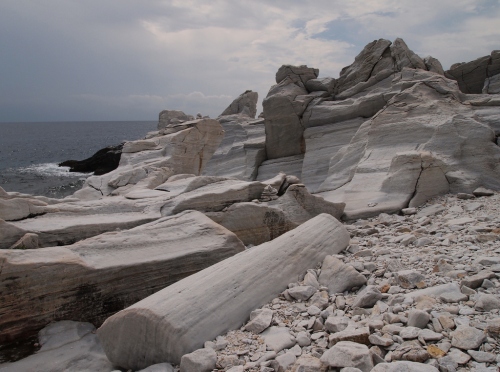 I’m delighted to announce that The Small Heart of Things is now out in paperback, available from independent bookstores and online sellers. On behalf of the book I have a few upcoming events in England. Full details for the readings can be found on the events page or via the links below for anyone in the area, or if you wish to share with friends who might be interested. Many thanks!

20 thoughts on “The Marble Shore”