“We were deeply engaged in this improbable geology.”
– Patrick Leigh Fermor, Roumeli 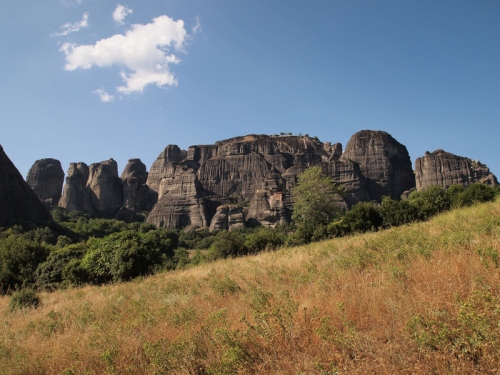 I woke early to beat some of the fevered heat of the plains, the kind of humid blaze that leaves you soaked to the skin by mid-morning. The silhouettes of the Meteora were etched faintly against the night sky when a startling cry cracked the last of the darkness. As light seeped in from the east, other wolves joined the first, a chorus of mysterious howls funnelling upwards like smoke between the towering pinnacles, reflected and echoing off the encircling stone drums until it billowed into the air as if a sail. As the wolves moved off with the arriving light, sheltering from the sun that would soon burn across the sky, the stone pedestals and prominences of the Meteora took shape in the silence of their leaving, as if they’d been called into presence by those wild and plaintive songs. 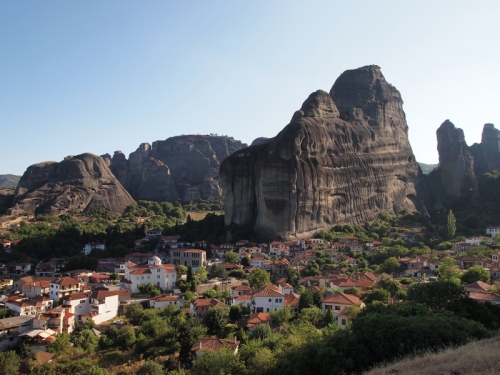 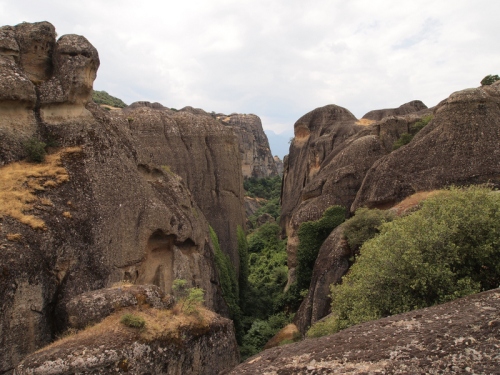 The nearest anyone has come to explaining the origins of the remarkable rocks of the Meteora – meaning suspended in air in Greek – is the German geologist Alfred Philippson. In 1897, he suggested that a river once ran into an ancient lake that covered what is now the plain of Thessaly, depositing in the same place where the Meteora have risen its rippling debris of silt, gravel, mud and water-smoothed pebbles and stones. Some 60 million years ago the river’s estuary was an alluvial fan that opened and spread from its point of entry into the lake. Over the course of thousands of years the layers of the fan deepened, eventually being compressed by the immense forces of water and earth into conglomerate – a type of sedimentary rock composed of the pre-existing stones that the river had washed into the lake – that was concreted together by hardened sandstone. When a massive earthquake emptied the Thessalian lake by cleaving open a channel to the Aegean Sea, the deltaic cone at the end of the river was raised from the lake bed into the sky. Loose sandstone was rinsed away by rain and the stone pillars were further worn into their present sinuous forms, riddled and pocked with caves and fault lines, by wind, weather and subsequent movements of the earth. 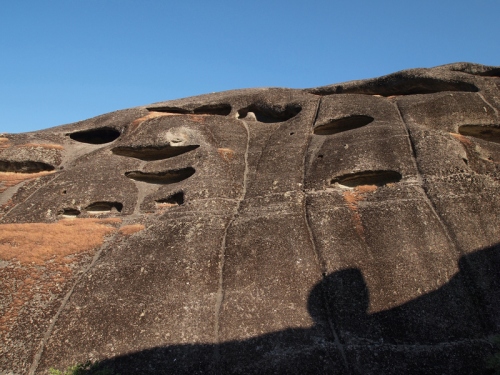 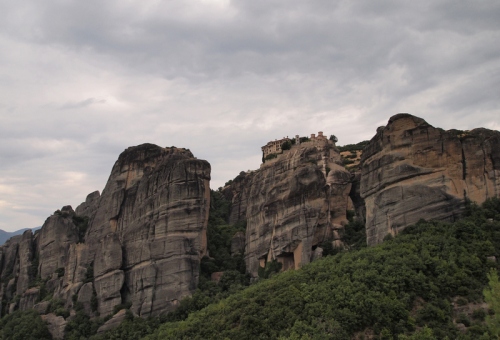 The stones are beguiling in their shapes – an entrancing skyscape that lifts eyes from the surrounding plain to continually peer upwards into the vaulted air. It must have been this same numinous sensation, pleated together with a longing to be nearer the heavens, which enticed the first hermits to live precariously on the rocks. It’s impossible for me to even imagine how it might have been done, but from as early as the 9th century Orthodox hermits retreated into seclusion in the Meteora, somehow climbing these sheer towering stones to live inside the clefts and fissures of the cliffs. Like the peregrines, Egyptian vultures and black storks that still nest on the virtually inaccessible rock faces, they became sky dwellers, at home in a world of soaring stone.

By the 14th century the hermitic community at Meteora had become so large that monasteries were founded on these high pedestals and plinths. As a measure of how bewildering the ascents – let alone the construction – would have been, St. Athanasios Meteorites, the founder of the first monastery, the Transfiguration of Christ, was said to have reached the top on the back of an eagle. A conservationist I spent time with in the Meteora told me that when rock climbers – using all the modern equipment and technology available to them – finally ascended one of the highest and most demanding pillars in recent years they found tortoises roaming its grassy top. It’s believed they were placed there by monks who had somehow ascended the sheer wall of stone as potential food sources during long seasons of solitude. 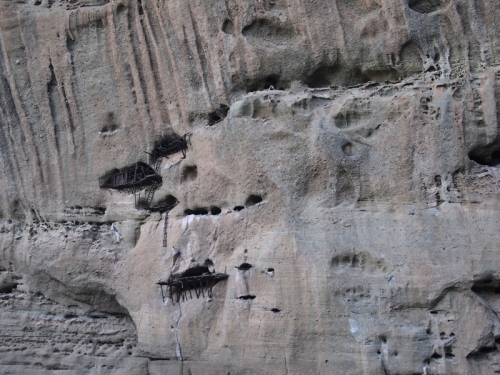 The monasteries are astonishing. Not only in the rich patina of centuries-old frescoes that adorn the churches’ walls, arches and cupolas, but in the staggering nature of their creation. They cling to the sheer cliffs as if extensions of the stone, the brickwork and masonry fitted seamlessly to the ancient, existing forms. They are a perfect example of affinity with place, built with such extraordinary and imaginative skill. Until the 1920s and 30s, when steps were eventually cut into the stone towers, the only way of gaining entrance to the monasteries was via a ladder that was raised up whenever the monks felt threatened, or to be wound upwards in a rope net by a windlass operated from the ascent tower. When an abbot was once asked how often the rope was changed, he was said to have replied: “Whenever it breaks.”

In his book Roumeli, Patrick Leigh Fermor writes of his journeys in the Meteora in the 1950s. By then he was already describing a vanishing, dying world. The great monasteries – totalling 24 at the height of their magnetic influence amongst the Orthodox – had been in decline since the 1800s, and by the time Leigh Fermor stayed at St. Varlaams, perched high on a lofty eagle’s nest of a plinth, there were only a few monks and nuns that remained cloistered in the Thessalian sky. There was no road winding between the monasteries as there is today, just paths to be walked, climbed or ridden over on horseback and donkey. Describing the incremental decline of the monastic tradition, the abbot of St. Varlaams says to Leigh Fermor that in the old days there was “a hermit in every hole in the rock, like hives full of bees.”

Since then the fortunes of the monasteries have radically changed, though there can’t be many more monks or nuns living inside them than there were all those decades ago. Instead the Meteora has become one of Greece’s premier tourist attractions. Listed as Unesco World Heritage Sites, they draw visitors from around the world to these rocks. But after reading the chapter about the Meteora in Roumeli, I’d wondered what might still be found of the old monastic tradition. In an out-of-date guide book to the region I’d seen that a solitary monk was, at the time of publication at least, in attendance at a remote and rarely visited monastery on the far side of the soaring dark rocks and so I left the crowds for a path that swung clear across a hill of burnished grasses smouldering golden under the sun. A procession of old and knowing tortoises kept me company on the way. I walked out along piers of dark stone, tracing my fingers over the pebbled surfaces, and looked out across the distant plain shimmering in haze. I passed the ruins of earlier monasteries and hermitages, their long abandoned shells clinging to the edge of canyons. Alpine swifts, peerless in their artful swirl about the high crags, danced at the tapered edge of the sky and ant-lions flared from the grasses like blown glass, their translucent wings lifting and spinning, glittering helicopters of light.

I dropped down through a bone-dry oak grove into a ravine. At times the path left the earth out of necessity, continuing in a smooth groove over stone. Countless others had walked this line into place, together with its myriad tributaries that branched off like echoes of the original river across the landscape, and yet I met no one on the way, just a few far figures glimpsed high about the hills. All of the tracks were well-worn, cutting cleanly through sunblown grasses or curling tight to the curve of stone with the certainty of sure-footed mountain goats. These were ways kept groomed by regular passage, but who used them? If not now, at the height of the summer tourist season when hundreds of buses and cars spilled their passengers into each monastery, on a day when it was impossible to find anything resembling solitude in the crowded interiors, then when? I would like to think that pilgrims and parishioners make this journey out of season, keeping these paths mostly to themselves. “All the most sacred places,” as Roger Deakin once reminded us, “are secret.” 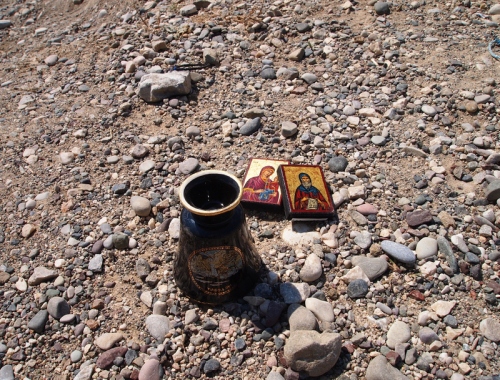 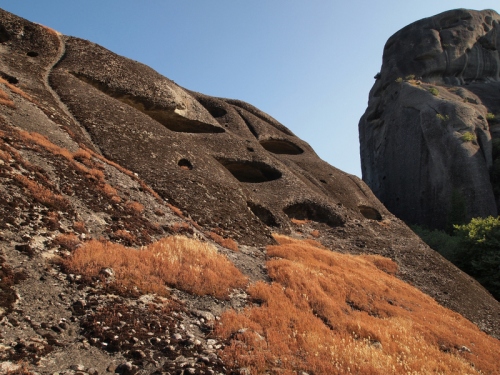 I climbed a long set of steps to reach the monastery wedged like a nest inside a cleft of high cliff only to find its door closed and bolted. I listened for movement or sounds from within, but heard only the constant song of cicadas that rose from the oaks below. On the lip of the door sat an envelope. Crimped and curled by the sun, it felt brittle when I picked it up, even though it had only been there for four days according to the date written on the front. It was addressed simply To the Monastery in English. The envelope had been hand-delivered by its writer, and when I turned it over I saw another message on the back: “You forgot a pen down at the cross, so I bring it back to you. So you can go on writing and studying.”

I weighed down the envelope with a stone, the tip of a black Bic pen poking from a corner. There are still some, it appeared, willing to dwell nearer the sky, at least part of the time. I descended the steps and took a last long look at the monastery, the elegant Byzantine brickwork of the church and living quarters recently restored. It inhabited the rock as if indigenous, as suited to the cliffs as vultures and eagles perched on the rim of their caves and ledges. Stone become home. I turned onto the path as dark clouds eclipsed the sun and threatened rain. It was time to cross this ancient stone estuary again, to be deeply engaged with this improbable geology.

34 thoughts on “Meteora: Stones of the Sky”