These days are cast like a spell, stretched taut and seamless across two seasons. Spun from sunlight and warm winds, they’re days with bright promise still inside them, nested there like pearls. The high vaulting sky might be the sea, as if by leaping into it you could float clear across the blue. Sailing without winds or wing. The days linger like lovers, lost in their slow unfolding.

Swallows skim south over the garden, called back to a season that’s just starting on a far continent, with mountains, sea and desert still ahead. A breeze carries seeds to a new beginning, and animals gather the wild harvest. We’re at the edge of the turning world, a part of the spinning but not yet ready to move on while the lake and hillsides are aglow. When light floods the valley we’re swept up in its spill, like tumbleweed in a wind. There’s no way of knowing when these days will end, and I have no memory of them ever beginning. It’s as though they’ve been with us all along, ancient and immutable. Radiance that’s been summoned to stay.

I climb through a net of pale grasses where lizards scatter across stones. Butterflies huddle on the rim of fading flowers, their wings on the very cusp as well, cracked and rubbed thin by lives scalded with sun. A warm wind finds my skin. I settle back on the slope to hear sheep bells sifting through the valley, a sweet meandering path carved from air. The stones are hot against my back, like they’ve hoarded a whole season inside. I listen to windsong in the grasses, a chorus of whistling stems that echo like the notes of gone summers, those that lingered and glimmered when we were young. Summers unfurling like a prairie against the sky, vast and burnished and without any end we could imagine. Summers that flooded us to the bone. 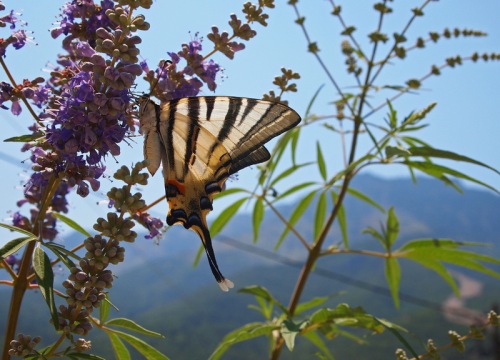 Three hawks circle the tawny ridge, their sharp calls falling like water. I watch them climb one after the other on a ladder of air being drawn up by the sun. Spiralling higher and higher, they look like dark spots on the surface of our star until the sky finally empties again. There’s just the deep blue sea that umbrellas me, and the kind of silence you hear inside water. It’s a rare and intimate quiet, enclosing and still. The insect hymn has finished, put back on a shelf like a musical box. Crops are cut and curing in the fields, and the roads are dusty and bare until harvest. Even the leaves that will soon rattle and drop are still stitched to trees, hanging on in a glow of amber and gold to see this blaze to its end. It’s the last dance of summer, and it sways to a song of its own. Even the sky seems too small to hold all of this longing.