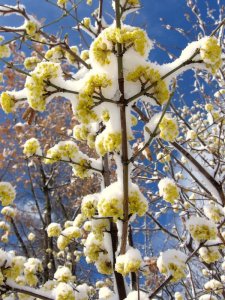 While the days edge tentatively into new territory, the nights hold fast to winter’s side. The resplendent black sky splashed with stars is clear, and startlingly cold. A seam of smoke from our chimney floats over the dark like a ship at sea. For a week or so I’ve heard the wheel of time shifting forward: ice cracks like glass beneath my feet during the evenings, but the same, reshaped element trickles musically from the roof throughout the day. And then it cracks again with the fall of night. It is a time of turning.

There is the concept of a fifth season in Chinese thought, a period of still and reflective days suspended between true summer and autumn. When fire wanes into ash; a time of embers. But there is an equivalent span at this end of the year as well. The cycle of freeze and thaw resembles the ebb and flow of tides, a coming and going of the seasons, neither one in a position to assert itself clearly. It is a contested time.

A spectral land is revealed with the morning light: frost-laced grasses and icicle trees;  hard, glassy soil. But by midday the sun is warm on my skin, and lizards emerge from their hollows to briefly bask. A few, tentative flights are tried by bees, ultimately frustrated without flowers. The days have an ache to them, caught up in indecision, a promise of paths undefined. A time of see-saw and sway. Invisible sap will soon run with warmth; until then the trees clasp ice to their sides.

27 thoughts on “A Time of Turning”