After last week’s deluge the river ran wild with rain. It had transformed overnight from a sinuous set of bends where kingfishers flared like blue flames to a wild and churning tempest. The mud-brown water was washing off the mountains and cascading through steep granite galleries to roil across the plain towards the lake. The thrum and roar were recognisable, storms having altered the shape and nature of the rivermouth before.

It’s easy to arrive somewhere and imagine it from only that moment on, as if it were set in its ways, fixed and immobile. For the same reason we sometimes find ourselves looking at old photographs of friends and family, even ourselves, and not recognising the earlier incarnations, unable to twine the past and the present together, the unknowable processes of growth.

Over the years I’ve watched the river rise and fall, weave and wend its way along a channel of ghostly willows before spilling into the lake. I’ve crossed it in the lucid light of June when it harboured sinkholes that swallowed my steps. I’ve crept along its edges in summer when pelicans gather at its shallow mouth, the sun-reflected water glistening about their feathers. I’ve seen the sandy banks sheered away and trees carried downstream; I’ve watched sandbars reach out and then withdraw as if unsure of the intimacy. But more than anything else, I’ve observed the river’s bewildering ability to change, the unforeseeable shaping of its ways.

A few days before the rains a friend wrote to me about C.P. Cavafy’s poem, ‘Ithaca,’  and I was reminded of it again as we walked beside the rising river. Cavafy was born in cosmopolitan Alexandria in 1863, a Greek well-versed in the Hellenistic history of the Egyptian city and the works of antiquity. Inspired by the journey of Homer’s Odysseus back to his native island of Ithaca in The Odyssey, Cavafy wrote his poem with the journey of the soul in mind, sensing that Ithaca – a spiritual as well as geographical entity – was the end of our days, a place to arrive at in good time. A great white egret flashed from a sandbank and struggled into a headwind over the lake. We watched the swirl of brown water needle the blue, translucent edge. 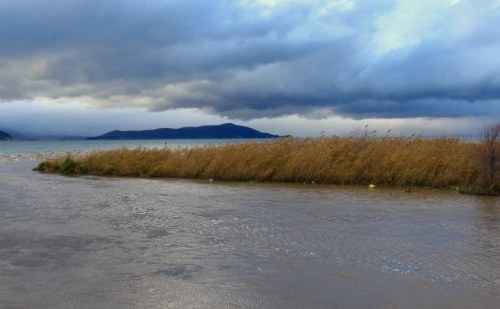 I’d become attached to the river in our first season, finding birds and reptiles and wildflowers of all kinds in the lagoon that encircled the estuary. Squacco herons and glossy ibis lowered into the marsh and grey herons patrolled the shallows. Marsh plants thrived in the warm waters and the ponds chorused with frogs; the still surface suddenly rippling with snakes. It was a luminous and enriching place to pass the hours.

By the following summer, though, the lagoon was gone, displaced by the river’s mercurial course. A sandy escarpment was all that remained and I was dismayed that the wetland could have vanished so quickly. But when the currents soon shifted again, enabling unexpected species to take root in new lagoons along the shore, I began to understand how the river was remade each day. As the surge of wild water pours through the channel, emptying the mountains of rain, the shape of its banks is changing, being sluiced away and streaming endlessly into the lake. The river is always arriving, beginning again and again, never reaching its Ithaca. 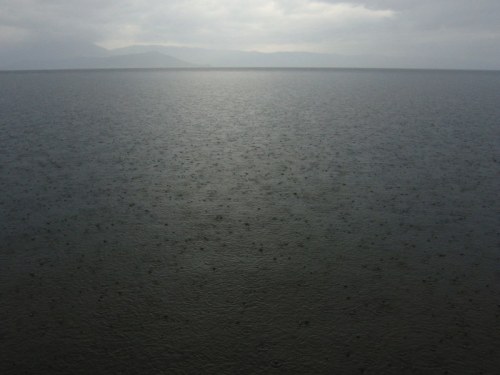 As you set out for Ithaca
hope the voyage is a long one,
full of adventure, full of discovery.
Laistrygonians and Cyclops,
angry Poseidon – don’t be afraid of them:
you’ll never find things like that on your way
as long as you keep your thoughts raised high,
as long as a rare excitement
stirs your spirit and your body.
Laistrygonians and Cyclops,
wild Poseidon – you won’t encounter them
unless you bring them along inside your soul,
unless your soul sets them up in front of you.

Hope the voyage is a long one.
May there be many a summer morning when,
with what pleasure, what a joy,
you come into harbours seen for the first time;
may you stop at Phoenician trading stations
to buy fine things,
mother of pearl and coral, amber and ebony,
sensual perfume of every kind-
as many sensual perfumes as you can;
and may you visit many Egyptian cities
to gather stores of knowledge from their scholars.

Keep Ithaca always in your mind.
Arriving there is what you are destined for.
But do not hurry the journey at all.
Better if it lasts for years,
so you are old by the time you reach the island,
wealthy with all you have gained on the way,
not expecting Ithaca to make you rich.

Ithaca gave you the marvellous journey.
Without her you would not have set out.
She has nothing left to give you now.

And if you find her poor, Ithaca won’t have fooled you.
Wise as you will have become, so full of experience,
you will have understood by then what these Ithacas mean.

17 thoughts on “Journey to Ithaca”