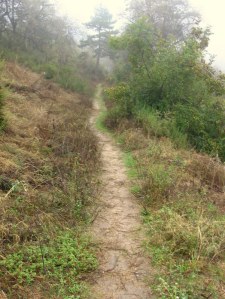 Empires of any kind eventually slide, having risen within the shifting and fickle orbit of political, social, economic and religious realities. It’s in the nature of things to fade so that what once seemed eternal exists only as memory, or as a scattering of stones. The traces mark the land with ruins and clues, half-hidden or submerged, sometimes mysteriously beyond comprehension, the relics of an earlier order enacted from the same ground.

Tucked away in the southwest corner of Bulgaria, nestled in the Pirin Mountains, is a place called Melnik, regularly referred to as the smallest town in the country. The writer Yuri Trifanov went even further in his 1967 short story set there, entitling it ‘The Smallest Town on Earth.’ The appellation bears little relation to the settlement’s current state of affairs, however, instead referring to a previous grandeur discernible in the restored houses and what’s left of the monuments dating from a time when Melnik was one of the cultural and spiritual centres of the entire Balkan peninsula. 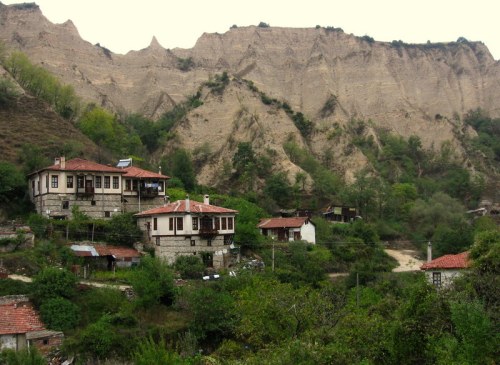 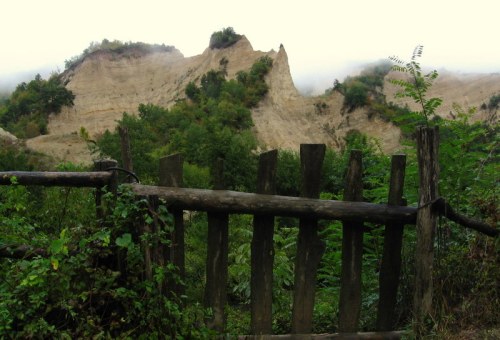 As equally curious as its fall is the landscape that Melnik rose beside, though the two are inextricably entwined. Melnik remains curtained off until the very last second when a parting in the steep palisade of sandstone towers suddenly reveals its staggered houses spanning a dry riverbed that winds through a narrow valley. It is a strange and beautiful landscape of imaginary forms: sheer pinnacles of sand; pyramids crested with bent and stubborn trees; long slopes of scree falling away to the mist-veiled valleys. During the Byzantine Empire, Melnik was naturally protected by these encircling spires and insulated from the emperor’s influence. This led to a long tradition of powerful, nearly autonomous feudal rulers epitomised by Despot Alexei Slav. From the year 1209 onwards he forged an independent mountain realm, consolidated through a series of vast fortress walls perched along the ridges, and using his considerable wealth to found monasteries, churches, and craft guilds in great numbers. His private residence, built around 1215 and still in use as a dwelling until as late as 1912, is amongst the oldest civilian buildings still standing in southeastern Europe. 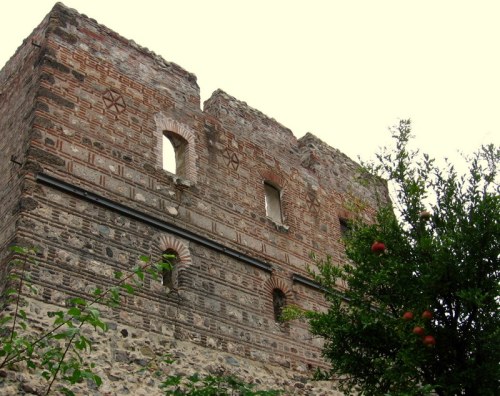 Over the centuries Melnik developed as a wealthy crafts centre, specialising in the working of copper and gold and the fashioning of ornate pottery and jewellery. But its real wealth came from the cultivation of vines. The dry red wine, fermented from a type of grape particular to the region, was stored and aged in vast subterranean cellars hewn from the hillsides and traded throughout the Balkans and Adriatic provinces, then further afield to England and Austria. It was from this very town, so the story goes, that Winston Churchill ordered 500 litres of barrel wine each year. 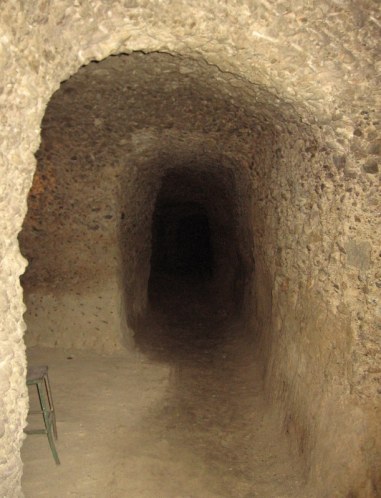 An oak-clad ridge that overlooks the southern edge of the town reveals the eminence of Melnik in earlier centuries. Walking it when the mountain mist obscured the houses below seemed apt; the narrow stretch of sandstone ridge high above the valley belongs exclusively to another age. It holds onto the remnants of the Saint Virgin Mary Spileotisa chapel, the Saint Haralampius monastery, the Sveti Nikola basilica, and the ramparts of Aleksei Slav’s monumental fortress, all built at the turn of the 13th century. Walking the path between the ruins I was taken with the silence that accompanied the falling and moss-covered stones. The mist rolled in around me and I tried to imagine the assembly of the pious that would have climbed the steep slope through a gulley of oaks to reach these places of worship upon the peaks. A parade of parishioners walking the same earthen path that I followed. 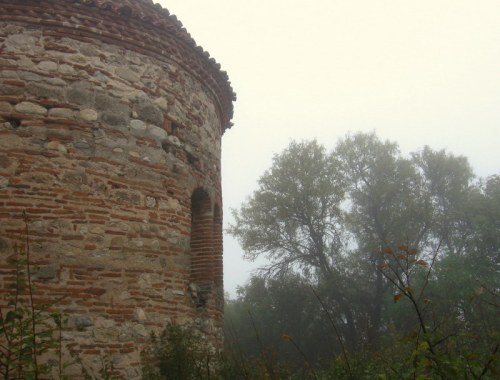 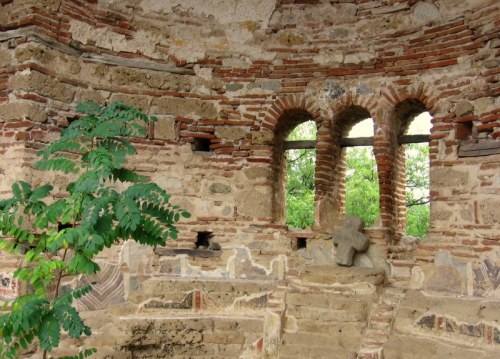 Until the very end of the 19th century Melnik boasted 70 churches, monasteries and chapels, 1300 individual homes and 20,000 residents engaged in a labyrinthine web of trade and commerce. Throughout the long centuries of the Ottoman Empire it had remained an important Christian ecclesiastical centre. But now only a couple of churches remain in use, more than enough to meet the spiritual needs of the 250 people who live there. In the town museum there is a black and white photograph of Melnik taken in 1912 that clearly shows the tiers of closely packed houses rising in serried rows up the hillsides. But when the mist finally cleared from the ridge that I wandered I counted at most only a hundred still below. 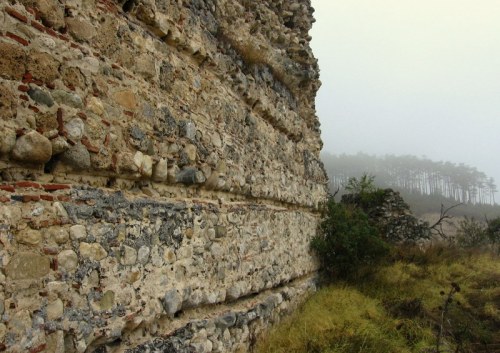 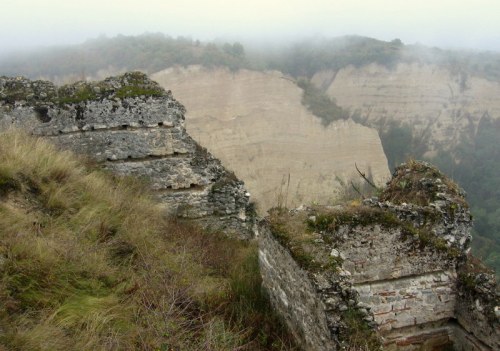 Melnik’s decline came swiftly. The Balkan Wars of the early 20th century brought division and emigration to a pluralistic community where Greeks, Bulgarians, Turks, Vlachs and Roma had lived. A virus peculiar to the Melnik vine strain devastated the grape harvests and the centuries-old wine cellars stood cavernous and empty. And while Melnik had long straddled the main trade route from the great Mediterranean port at Thessaloniki to the Balkan and Central European hinterland, the stroke of an engineer’s pen shifted the direction of the new road about to be built just far enough away to isolate Melnik yet again in its fortress of sand.

The pyramids and pinnacles that enclose the smallest town in Bulgaria are slipping, grain by grain, into the valley. Each winter storm and surging spring squall sheer a few more from the peaks. Eventually the mountains will flatten and fall, to be taken up into some new and arising geological mystery. And they’ll carry the last of Melnik’s memories and relics along with them. 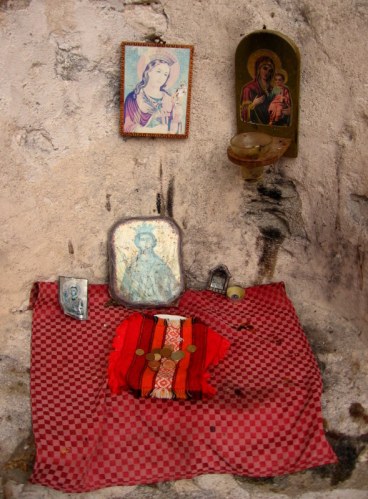 15 thoughts on “The Long Ridge Down”