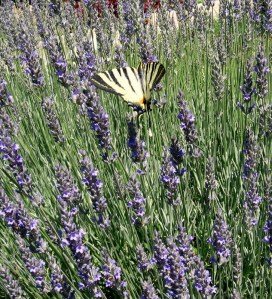 Despite its colour having faded to a pale relic of its name, the lavender in the garden remains an illuminated host. For much of the summer its spires of scented stems attract the bright and the beautiful: the glazed and glossy greens of chafers drowsily clambering about the flowers; red admiral and swallowtail butterflies clinging with filament limbs to the bursting blooms; the tail of a green lizard swishing beneath a branch; the thrum and dance and swagger of bees.

But autumn brings change and a subsequent shift in the creaturely calendar. Although a few late lavender flowers rise expectantly through the rain they soon slump from the weight of it. The leaves darken with the wet weather and the whole plant carries an aspect of seclusion, a cold-season refuge harbouring the garden solitaries, the reclusive creatures that withdraw into its autumnal wreath of fading shades.

October shimmers with the spinning of silk, brilliant orb-webs slung between stems by the Argiope bruennichi spider. What is unusual about the web of this beautifully banded black-and-yellow arachnid is the ‘stabilimentum,’ a vertical zig-zag of reinforced web used to strengthen the silken snare. They’re spun near the eggcases that suddenly appear in autumn as well, mottled sacs tucked down amongst the lavender stems and suspended within a gossamer cage. They’ll hang there through frost and snow, through the winds and rains of winter until the first warmth of spring brings thousands of spiders the size of sand grains hatching their way through. The baby spiders are so small that the lightest breeze will carry them away with ease, swinging them on strands of silk through the vast and uncharted garden world to renew their kind again. 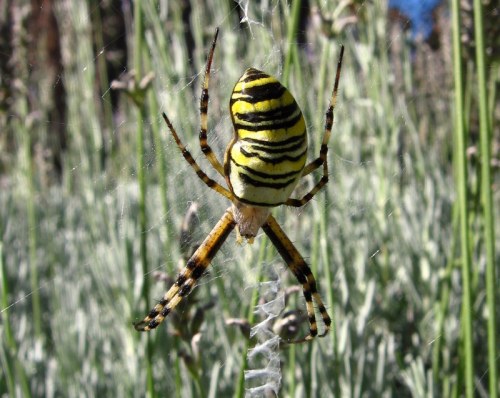 A praying mantis haunts this lavender world. Perhaps even two or three. Despite scouring the plants I easily lose track of them as they blend into the tangle of bent stems, only to resurface hours or days later. ‘Mantis’ comes from the Greek, meaning prophet, and the common name which has come to be regularly used for many of the world’s 2000 mantis species is derived from the prayer-like stance of the insect’s arms held clasped together before its face.

While watching the mantis, however, it occurs to me that the name might originate from an aspect of the creature’s character rather than its posture: the nature of its stalking. The praying mantis barely moves while it hunts small insects such as grasshoppers, shield bugs and wasps, waiting until they come within reach before unfolding its hands from prayer to snare its slowly closing prey. And when it does move, its appendages shift meticulously and its head swivels with such precision that I’m immediately reminded of the realm of the contemplatives. There is something monkish and devoted about its deliberateness, expending no energy other than necessary. There’s no frivolous fussing about; each turn of its compound eyes is graceful and without waste, as though its true purpose were of another, higher and invisible, order. 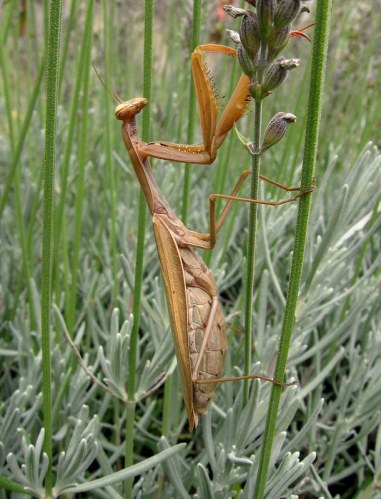 Standing beside the lavender I hear a deep hum circling what’s left of the blooms. It’s a hummingbird hawkmoth traplining the flowers, returning at the same time each day to a particularly rich store of nectar. There’s no certainty on how this memory-route is encoded, or even achieved, which seems apt for a moth blessed with such a mysterious form of hummingbird flight.

I try photographing the day-flying moth but eventually put my camera away without success. It seems that some things I’m not meant to slow. The hawkmoth blurs through the images, a ghostly apparition, a streak of flared and fading light that arcs over the wet gardens and pale meadows of the village at the dying of the day. So I crouch beside the lavender plants instead, waiting until the hummingbird hawkmoth eventually nears, as it always does, without any concern for my presence or proximity. It’s balanced on the very air itself, a stillness in unending motion fluttering beside my eyes. I watch its proboscis unroll into a flower like a river finding its way. I think of cupping my hand tenderly around its body to feel the pulse of 80 wingbeats a second vibrating through my veins. When its nectar gathering is finished it arrows off into dusk where it will settle with its wings at rest on a stone for the night. But tomorrow evening, by whatever complex internal map of flowers and scents it stores, it will make its way back to this same nectar patch, this straggle of fading flowers, this undimmed lavender world. 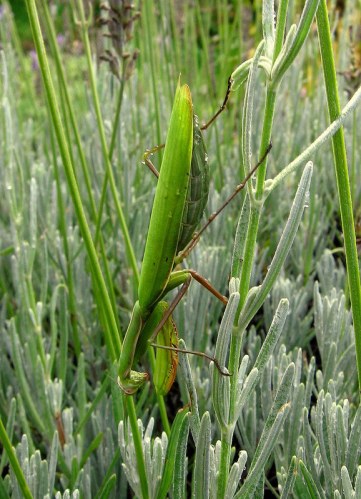 I’m pleased to have a new piece of writing published this month in The Redwood Coast Review. Set up to support an independent and volunteer-run community library in Gualala, California, it’s a terrific publication whose efforts support a dynamic local initiative. My piece, ‘The Distance Between Us’, can be read in an online version here, beginning on page five.

17 thoughts on “This Lavender World”