Two things were of particular interest to me when we travelled to Tetovo in the Former Yugoslav Republic of Macedonia, and they both concerned longevity. While one was a religious building that had withstood a devastating 17th century fire, armed ethnic conflict and the changing fortunes of shifting political borders, the other was a religious order that had endured the collapse of the Ottoman Empire, the Communist ban on worship and the suspicions of its co-religionists. And little held the two things together. 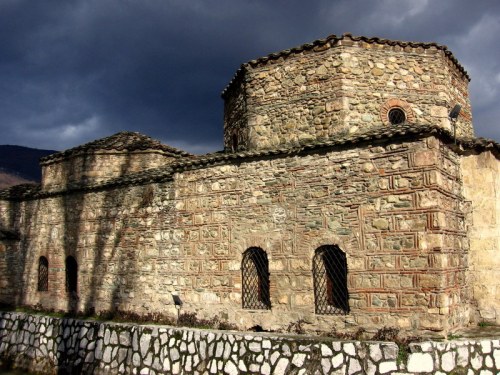 Tetovo sits at the foot of the Šar Mountains, an imperious range that separates Kosovo, Albania and FYROM. In the days of Yugoslavia, often recollected with great nostalgia by citizens of the region, it was a popular resort for skiing, but much of the allure has drained away over the course of conflict, coupled with the fact that Tetovo became the de-facto home of the ethnic Albanian resistance movement. Arriving in the city, I was surprised by how quiet and unassuming its character seemed, home to two enduring Ottoman relics.

The Šarena Dzamija, or Painted Mosque, was built in 1459 and paid for by two women, Hurshida and Mensure, whose graves are located within the grounds. While the 17th century fire destroyed much of the town, the mosque survived with its eccentric elegance intact. The Painted Mosque resembles a deck of ornate playing cards laid side by side over the facade. More than 30,000 eggs were used to prepare the paint and glaze that went into such elaborate decoration; it is an exquisitely rendered piece of religious art, commanding attention amidst the drab, Titoist surroundings. But it remains of practical purpose as well. The mid-morning call to prayer brings men and women streaming into the grounds, carefully setting shoes aside to step into the place of prayer, having done the same for centuries. Along with the stone bathhouse beside it, and the richly latticed woodwork that adorns the entranceway, the mosque complex is a tribute to a meticulous and enduring craft. 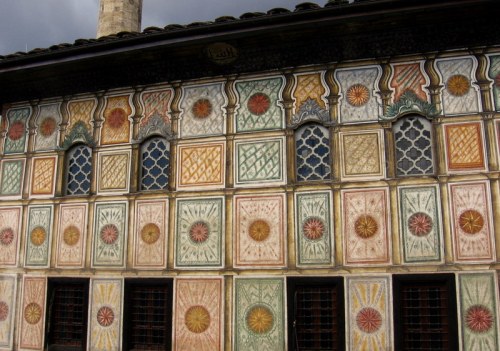 Not far from the mosque are the grounds of the Arabati Baba Bektaši Tekke, home of another enduring belief. The Sufi equivalent of a monastery, the tekke belongs to the Bektaši order of dervishes. Sufism is the mystical branch of Islam and the dervishes are popularly known for their whirling, trance-like meditations, although in actuality only certain orders perform them and they comprise a small part of a much greater system of belief and ritual. 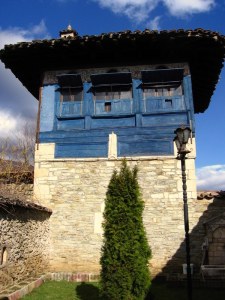 The Tetovo tekke was founded in the late 18th century, though the Bektaši presence in the area can be traced back to as early as the 16th, and is one of the most important remaining monasteries in the Balkans. It was the seat of the Bektaši order until 1912; until that time tekkes were a common feature of the Ottoman landscape in the Balkans. But with the collapse of the empire the Tetovo dervishes fled, no longer secure amidst the changing ethnic and religious composition of the land. Even in Turkey their demise was swift and decisive; in his drive towards a secular state, Kemal Ataturk had tekkes throughout the country, three hundred in Istanbul alone, closed as of 1924 and the Sufis’ practice of mystical rites was forbidden. Ironically, the whirling dervish performances have been revived, and are a much-touted, and often expensive, tourist attraction in contemporary Istanbul.

Many of the Tetovo dervishes fled for Albania where the Bektaši order retains a strong presence, and by the Yugoslav era the grounds and buildings of the tekke had been converted into a hotel, restaurant and disco for the ski tourists arriving in the Šar Mountains. The lodge finally returned to its original purpose in the early 1990s when a law was passed restoring property nationalised by the socialist state, and a small number of dervishes live within its walls. 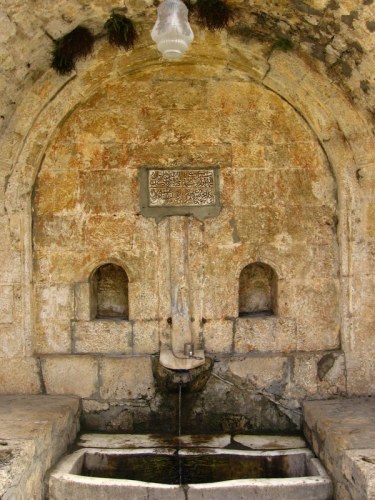 The baba, or priest, of the tekke was a giant of a man, tall and gentle, with a long ginger beard tapering to his chest. He’d been working in the garden when we arrived, so we were seated at a table and brought Turkish coffee and sweets. A young man, a dervish in training, acted as the baba’s translator when he eventually joined us. The baba spoke thoughtfully of his belief in tolerance and equality, of having no barriers between faiths; he talked of how the tekke, that complex of gardens, cemetaries, meditation halls and prayer rooms, was the perfect place for him to pursue a connection with God, a divine communion. But he also spoke of unresolved problems with the more traditional Islamic communities that use the Painted Mosque, who regard the mystical element of the dervish orders suspiciously and have been trying to usurp the usage of the tekke.

The young dervish, who had chosen his vocation when still a boy, showed us around the grounds. I asked him how he saw the path of his life progressing.  “When my training is complete, I will be sent where my teacher, the baba, believes I will be best able to help others on the Sufi path.”

“Where will you go?”

I then asked the young man if he would miss the place that encircled us, the enduring gardens and prayer halls, the wooden sleeping quarters that had housed his predecessors, the Ottoman fountains – simply the peace of being there.

“I love being here, but it doesn’t matter to me where I am. Here is no different from there. This place is the same as that place. They are all God’s places, so they are all one.”