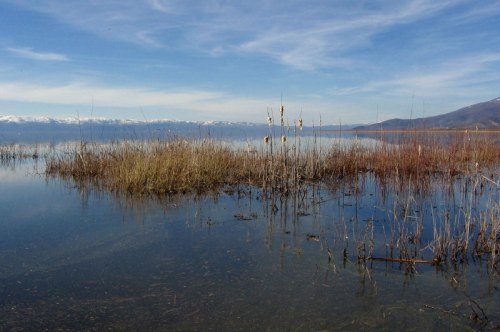 Between winter and true spring are days of strange emergence. The landscape is in limbo, neither one season nor the next. Mammals explore the light, as well as the night. Only a few meagre wildflowers surface into the world, but when they do they do so with extravagance. And each year, around this time, I walk a stretch of the coast that runs along the southern edge of Great Prespa Lake to see what I can find.

The wildcat was hunting in the open, at the edge of the scrub. When I crested into view it vanished without a look. Just the memory of its fleeting, muscular presence and dark, ringed tail lingered behind. But the fox wasn’t nearly as wary. I spotted it along the strand, pawing at the

beach for grubs. It casually roamed the wrack, a fluffed-up, rust-red tail trailing each of its steps. The animal was gradually making its way towards me, interrupted by lengthy investigations of the shore. I crouched down into thick reeds that backed away from the water to wait. I watched newly hatched marsh flies tangling in the air, the early spring light skimming the still water.

Twenty minutes later and there was no sign of the fox; it must have turned back or burrowed into the reedbed. I stood slowly and peered around the corner of the reeds. The fox had halved the gap between us and was walking on water, using pieces of driftwood as a series of pontoons. When it slipped, and a foreleg slid into the lake, it gave up its quest. Turning back for the shore, it started my way again. 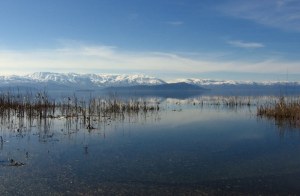 I retreated into the reeds. I didn’t have to wait long this time; the sound of shifting beach shells grew steadily louder. When the fox turned the corner where I hid we were only a  few feet apart. It’s head was held at a curious angle, an inquisitive slant. I suppose mine must have looked quite similar. For a few, suspended moments there was no trace of fear in its small, black eyes. We stared at one another with what seemed like mutual surprise – a shared encounter at the edge of the lake. The fox then straightened its head and bolted swiftly away, racing along the shore the way it had come.

There were so few wildflowers, or colour in the land at all, that the wild almonds near the lake flamed like a beacon far and wide. Thousands of awakened wasps and bees fizzed around them, congregating on the only blossom they could find.

After a winter of heavy rains and snow the lake level was far higher than usual. I’d brought rubber boots, and needed them immediately. Trudging along the shore, I waded through deep, marshy pools. The fox reappeared after a crashing dash through the reeds, streaking at speed into the distance. I soon came to a deep thicket of reeds myself – they’d cut off the shore, spanning the marsh on my left and the lake to my right. I stepped into them, not wanting to turn back, and kept my head down as I went.

I began breathing in reed seeds and 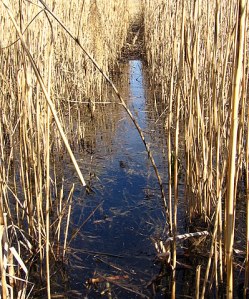 hacked them back up. Bits of chaff found their way inside my clothes; I felt the rashes rising. There seemed to be no end to the reed bed. Unlike other years, when I’ve walked the length of the coast, the lake level had left me stranded in a difficult habitat, without knowing a way out. I decided to carry on, and a few minutes later a path appeared by my side. It had been hewn neatly from the reeds, the tall brittle stalks flattened like fallen trees. It was an otter path, a slim corridor from den to dinner table. The path was too serendipitous to ignore; it was, after all, the otter’s place, not mine. Their knowledge is far greater than anything I might learn here. I walked on otter ground, grateful for its exacting ways.

At the edge of the marsh I saw that my rubber boots would be of no use; the water was far too deep for them. So I removed my boots and socks, rolled up my trousers as far as they would go, and waded in. The water was winter-cold and numbing, but the otter had crafted a clear route to the other side. Emerging from the marsh, I walked on a path of flattened reeds again and wondered, come evening, what the animal would make of my strange, intruding scent.

The silver birch forest beside the lake was still awaiting leaves. The branch tips blazed red, and the white bark glowed with the lowering sun. The silence of the damp woods was magnetic, like an electric pulse or energy circulating invisibly within it. I’d thought of threading through the trees, forging a way back via the forest, but something in the silence changed my mind. I wished to leave the stillness intact.

When I started back on a track beside the woods a brown hare thumped from the reeds, tattooing a long crescent in the sand before dissolving back into scrub. Dusk flooded the day and a crisp, still-winter chill swept in with the dark. I picked up a path that took me away from the lake and left the shore, the silence and the secrets behind.