On the night of November 23rd, 1943 Allied bombers destroyed much of the Kaiser Wilhelm Church at the heart of Charlottenburg, Berlin. Built by the Kaiser at the end of the 1800s in honour of his father, the church lay largely entombed by its own fallen stone. All that remained was a shattered shell and the bell tower. The church’s priest , persecuted for his steadfastly anti-Nazi beliefs throughout the regime’s reign, conducted a Christmas service at the end of the war, the parishioners congregating beneath the barely suspended arches of an open-air ruin. Soon after, however, the church was condemned as too dangerous for continued use and a decision was made to retain what remained of it as a memorial to the futility of war and to construct a new church beside it. 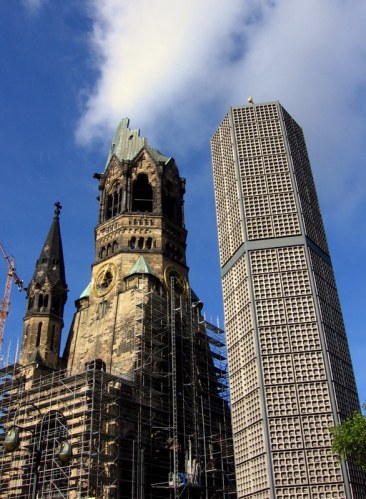 Designed by Egon Eiermann, the new church was consecrated in 1962 on the same day as the new Coventry Cathedral in England – the old one having been irreparably damaged by German bombers in 1940. Hanging amongst the mosaics of the original entrance hall to the Wilhelm Memorial Church is the Cross of Nails, made from the charred and twisted pieces of iron that once held the roof timbers of Coventry’s destroyed cathedral together. The gift of the Cross of Nails speaks of the church’s guiding purpose, dedicated as it is to reconciliation – between people, faiths, races and cultures – and the fostering of mutual exchange and understanding.

The modern church bears little resemblance to its predecessor. The bell tower stands like an obelisk beside the old, and the octagonal church is emblematic of 1960s urban architecture. But they act as ideal complements, bridging the divide in forms of design while articulating a decisive, and ultimately necessary, break from the past. While there were calls to restore the church to its original, 19th century design, a bolder vision saw how potentially empty of meaning the resurrected edifice might have been.

Inside the new church I experienced the spirit of its intended purpose. The walls are a honeycomb of blue light.  Over 21,000 pieces of glass, all blown by hand in a single French workshop and flecked with emerald, yellow and red, surrounded me. I took a seat and stared at the enveloping blue space while an organist played above me. It recalled to me the first time I’d seen a painting by Mark Rothko, the experience of being submerged in another world, a mesmeric space of purity and contemplation – a thought no doubt intensified by the fact that some of the painter’s late, meditational works are the sole exhibits of a chapel in Houston, Texas.

But the longer I sat there the more timeless the moments seemed, like waves washing endlessly ashore. I could have sat there for hours without knowing, doing nothing, caught up in the blue light, the empty space, the stillness and silence. While there I remembered a framed letter that I’d read while inside the ruins of the old church. Written by a Canadian whose father had died in the Second World War, the son spoke of the complex set of feelings he experienced when coming to Berlin on a visit for the first time. Anger, blame and grief all dwelled within his words. But while listening to the recital of a Bach cantata in the Kaiser Wilhelm Memorial Church something altered within him. Surrounded by the glimmering blue glass, the transfixing light suspended at the core of each piece and the shadowplay of the cantata, the man felt forgiveness for the first time.

The weight of place can be overwhelming. At times we focus our mourning intently, gathering up incalculable losses and letting them rest at a singular site that speaks for all – a place of collective and distilled memory. Memorials mark our world in its entirety, symbolic and actual shrines, museums, temples, cenotaphs, hillsides, graves and other sites of remembrance or atonement. Unable to contain the myriad stories of individual lives and loss they can nevertheless act as a catalyst to begin anew without forgetting the past, or to allow a process of healing to be sustained. Memorials feature across the surface of Berlin, a tideline where the memories of many wars and atrocities have come to rest – whether the markers of the Cold War dead placed at the point of their failed crossing from East to West or the standing stone memorials to the murdered Jews of Europe sited in a vast space near the Brandenburg Gate. But it was away from the city’s more conspicuous memorials that I found a place that evoked in me an enduring impression.

Designed by Daniel Libeskind as a symbolically fractured Star of David, the Jewish Museum of Berlin contains stories, photographs and artifacts spanning nearly two millenia of Jewish history in Germany, not only the terrible end of that time. It is a celebration as well as a requiem. But there was a door at one end of a corridor that rarely seemed to open, despite the hundreds of people touring the exhibits. A sign beside the door read ‘Holocaust Tower’ – and like many of our most significant moments it was the unexpectedness of its arising that helped lend it its depth. When the door closes on the sounds of the guided tours, of children running along the corridors and adults asking questions or whispering in front of an exhibit, there is a simultaneous opening. Museums rarely contain space for silence and consideration. By their very nature they draw people together, into conversation with each other around the archived objects. Some things, however, exist beyond the range of language.

Silence lowers like a sudden fall of snow inside the Holocaust Tower. There were a few of us inside the chamber, but I may as well have been alone; the place instills such solitude. It rose unhindered around me, its symbolic emptiness not eased in any way. Built of unadorned concrete the tower is neither heated nor cooled. The bare walls climb 24 metres to reach the only possibility of light – a thin slit in one high corner letting in the only light there is, that of the day and season itself. The blade of stark, October sunshine streaked through the opening to hit the opposing wall, from where it fell like pollen to the floor. We were clasped in a half-light and suspended in silence. Only it was a strange kind of silence, disconcerting because of its common, everyday quality. The high sliver in the wall where light enters allows the sounds of the city to seep in as well. Closed off from the museum – the echoes of stories and photographs of Jewish life in Germany still carried inside me – I heard sparrows and car engines, a blaring horn and the wind catching the corner of the building, a man calling a woman’s name across the street. A lament for the ordinary. The sounds were as invisible as the lives in the museum, but I was more certain than ever of their presence. The world without became the world within, remembered out of the silence.